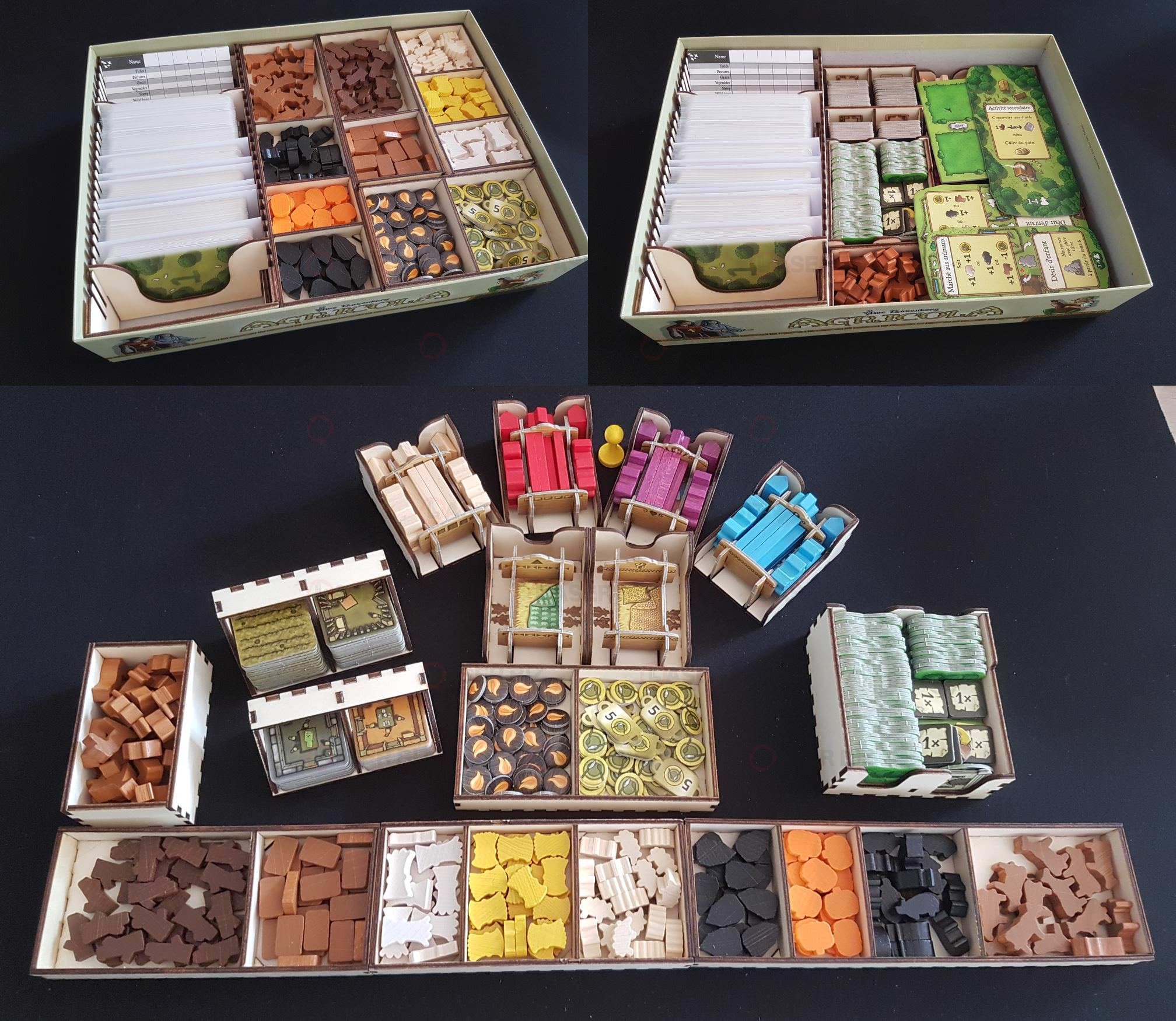 This insert was designed with 3 mm plywood in mind, and should work fine with materials around this thickness.

This is an insert for the Agricola Revised Edition board game. It is specifically designed around the Farmers Of The Moor expansion, and should also store the 5-6 players expansion (not tested, but I tried to take everything into account for it, please inform us if you tested it).

It can be stored inside the original game box, including the 2 expansions, with the lid slightly raised.

The parts of a given element are mostly generated next to each other vertically. It should be straightforward to match them.

Here are the different elements, from left to right in the generated file.

The cards are all kept in a tray, with paper dividers to sort them easily. When the tray is not full of cards, wood dividers slides in slots in order to keep the cards from falling into the empty space.

There should be enough space for the main game, Farmers Of The Moor, and the 5-6 player expansion, but not much more than that.

To keep a lower profile, the cards are at a slight angle, and the paper dividers tabs are horizontal instead of vertical. A small wall keeps the card against one side while the tabs protrude on the other side, above the small wall.

The wall with the big hole is the sloped one. It goes between the two "comb-like" walls first, with its two small holes at the bottom. Then there is a low-height long wall with a sloped edge which should go from the sloped wall to the other side. You can finish the tray with the last wall at the end.

4 trays with movable walls are used to store resources. They were designed to store them in this order:

The wall would probably be better if fixed instead of movable, but I would like to test with the 5-6 player expansion to be sure their positions are correct with it too.

The little feet of the movable wall should be glued. The triangles are put horizontally, with their bases towards the sides.

The lower level tray is used to store the horses.

Two boxes are generated to store the room/field tiles. One for the wood/field, the other for the clay/stone. They are stored with the main opening upside, but I prefer to use them during play with this face on the side.

A box is generated to store the Moor/Forest tiles, and some other tiles such as the "multiple resources" cardboard tokens.

Be sure to match the pieces so that the walls with smaller heights are next to each other.

Each player has its own box where the bits of his color are stored. The cardboard bed from Farmers Of The Moor is central to this box.

During assembly, the small bars are put in the middle holes. The two bigger holes at the ends are used for the bed feet. The bar keeps the bed from protruding underneath.